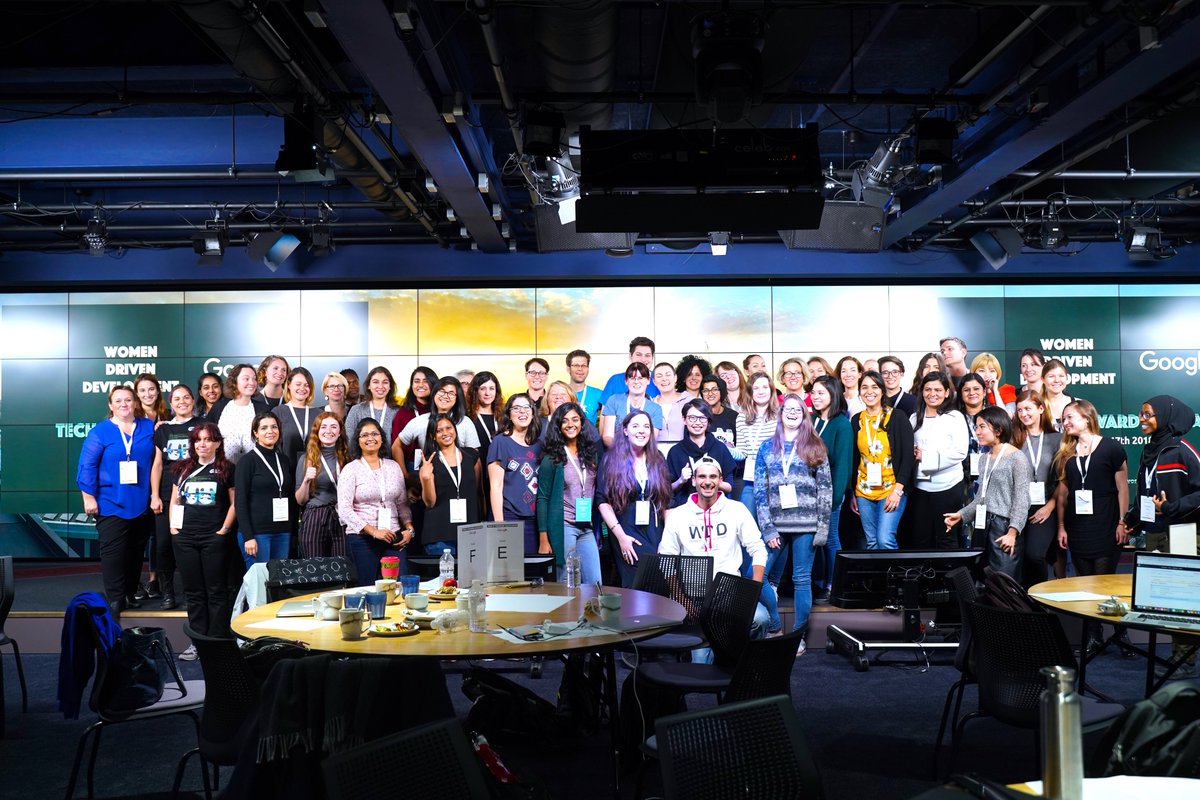 On 17th October we joined 60 other people at the inaugural Tech it Forward Hackday. Organised by Women Driven Development, the event was sponsored by Google and hosted at their London office. The hackathon was aimed at gender minorities but open to everyone who works in or has an interest in tech.
The theme for the day was to use technologies to:

The day started with talks from four senior women from the London tech community (Software Engineering managers from Google, BBC and Deliveroo). They spoke on a range of themes which were all very relevant to the day; including dealing with imposter syndrome, the importance of coaching and mentoring, and the power of embracing half built ideas and building fast by embracing imperfection, and not accepting the status quo. These talks really helped to set the scene for the day, and it is always very inspiring to hear stories of how people got into tech and how they have made a place for themselves along the way.

We had been divided into 10 teams of around 4-8 people ahead of the event, and most teams had discussed in advance what they would be interested in building either via slack or in person.

Sarah’s team - Team A had already decided we wanted to build a emotion journaling app aimed at children and young adults. We spent the first couple of hours of the day discussing the idea, how we would implement it, and what the user journey would look like, as well as the all important matter of how much we would be able to build during the afternoon. After lunch we got to hacking, we started to set up an app using React Native, but quickly discovered that none of us had any experience of building apps and were far out of our depth, we also discovered that setting up emulators on our various laptops was going to eat significantly into our precious hacking time. We decided to switch to React web and used the Material Design React UI library to allow us to add components quickly. This approach got us to a demo-able prototype just in time!

Hannah’s team - Team B - Hannah managed to go to the pre-hackathon meetup a couple of weeks before and got to meet the majority of the team beforehand. It was good to discuss some of the ideas in person following up on Slack and voting for the one that would go ahead. In the end we decided to do one of the suggestions put forward which was to build an app that listed venues (cafes, restaurants, bars and pubs) in an area of your choice that were accessible to people with limited mobility. This would include information about step-free access from street to the venue, whether parking was directly outside, if wheelchair accessible lifts were available and if toilets were not only accessible but easily-accessed.

Unfortunately we couldn’t find an existing API for the information we required so we tried to mock the data and show what the journey would look like. Initially the team began coding in python which 3 of the 4 of us had experience in. From there we tried to integrate Google maps so that we could have access to real venue information. Since we didn’t have the accessibility information available to us the next step would have been to be able to take submissions from the public and venues themselves and to store that against venue list information from Google. We didn’t have enough time to do what we needed and ended up massively cutting down on our initial scope but we did have a working prototype by the end to show an example lookup.

During the evening we were also treated to some talks from four of the participants of the teens in AI hackathon. They spoke (very eloquently given their young age) how they got into tech, their inspirations - from cool grannies and to defeating terminators! It was really amazing to see young girls so excited by engineering and technology and its always great to meet our future bosses!

Each team presented their pitch, and gave a quick demo. The range of projects teams had built was amazing and I was really blown away by the huge range of technologies that had been used from slackbots to full stack web apps, some used machine learning, natural language processing, and image recognition, and at least one team were running across multiple clouds! I think my favourite was the team who had used TensorFlow.js & a Posenet model to control Google Street view using head movements, the aim being to make street view accessible to people who have limited muscle control. All very impressive for only a few hours coding.

We had a really great day at the WDD hackathon, it was great to meet and work with so many enthusiastic women, make some new friends and get to build something cool. Big thanks to the organisers Misa and Phoebe for all their work, and we’re looking forward to the next one!