Setting up an AWS VPC from scratch

Historically at OVO all product teams shared the same AWS account for hosting their services. This made sense at the time, when the organisation was much smaller and people didn't have much experience with AWS. Nowadays we have moved to a model in which each team has one AWS account for its production services and at least one more for hosting non-production environments.

Giving each team their own accounts makes a lot of sense in terms of autonomy, reliability and security. However, as teams made the transition from the old world to the new, a lot of them struggled to get started. It can be quite daunting to be handed a completely bare AWS account and told "set it up however you like".

With that in mind, I've put together an AWS account template that should be a good starting point for most use cases. I'll guide you through the main features using diagrams, and at the end I'll provide a link to a CloudFormation template that encodes everything you've seen.

It's worth pointing out that this template is merely a reference to help get you started. It's likely that you'll need to tweak it to suit your particular needs. 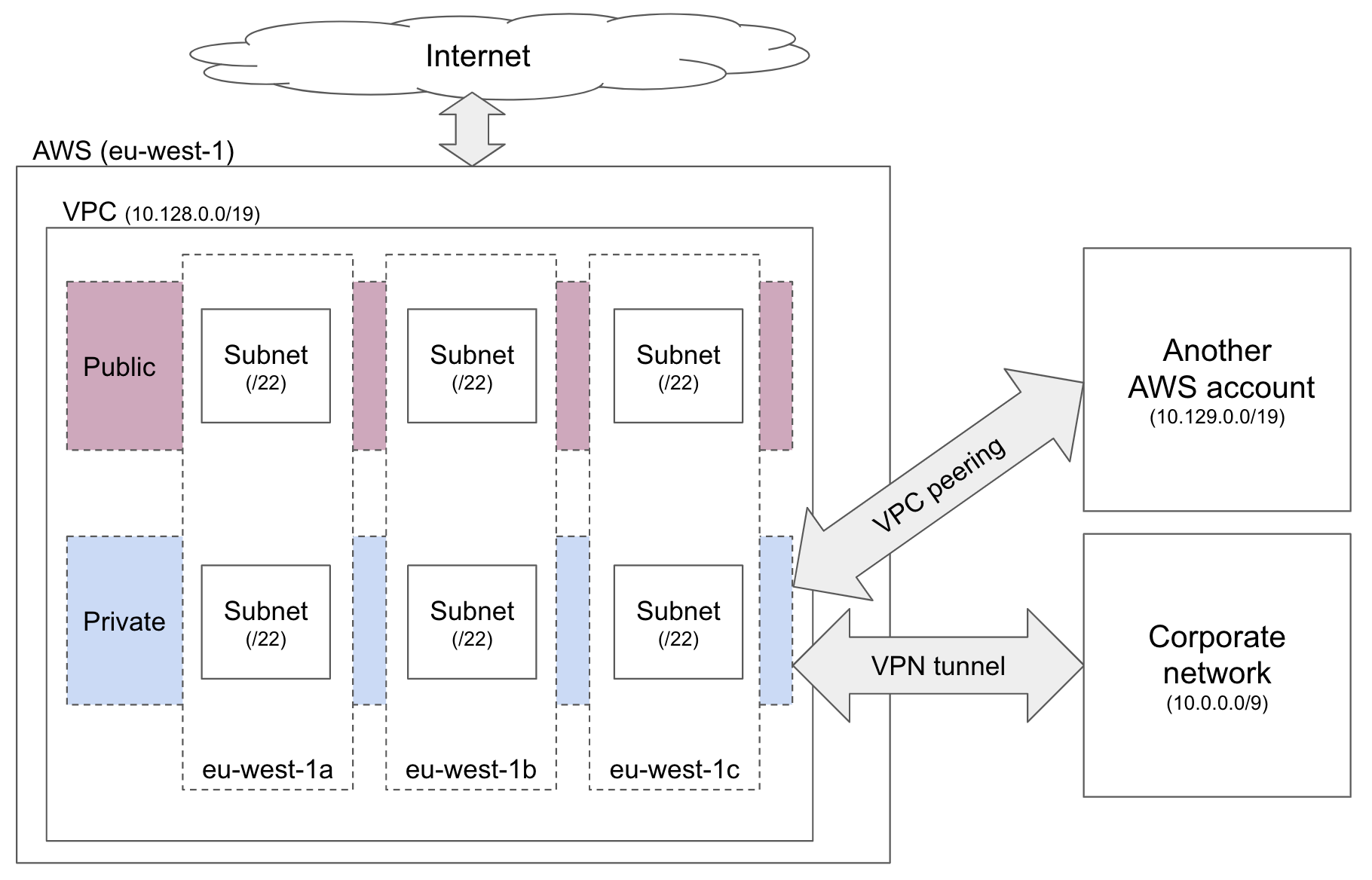 The diagram above shows the scope of the template. It contains a VPC with some public and private subnets, a VPN tunnel to your corporate network and a peering connection to a VPC in another team's AWS account.

Note that the region (eu-west-1) and the various IP ranges in the diagrams were chosen arbitrarily for the sake of concreteness, so you'll need to change them as appropriate to your environment.

As an aside, if you're planning to set up multiple AWS accounts for your organisation, it's a good idea to have a centralised spreadsheet or something to manage their IP range allocations. This avoids the risk of having overlapping IP ranges between different accounts, in case you want to peer their VPCs together in future.

Public subnets are where you put any resources that you want to be accessible from the outside world, such as internet-facing load balancers for your services.

Private subnets, on the other hand, host anything that should not be directly accessible. This includes your service's EC2 instances, Fargate tasks, Lambdas and databases.

Depending on your security needs you may also want to have a third "super duper private" layer of subnets, completely isolated from the outside world, where you put their databases.

So what makes a subnet "public" or "private"? Two things: 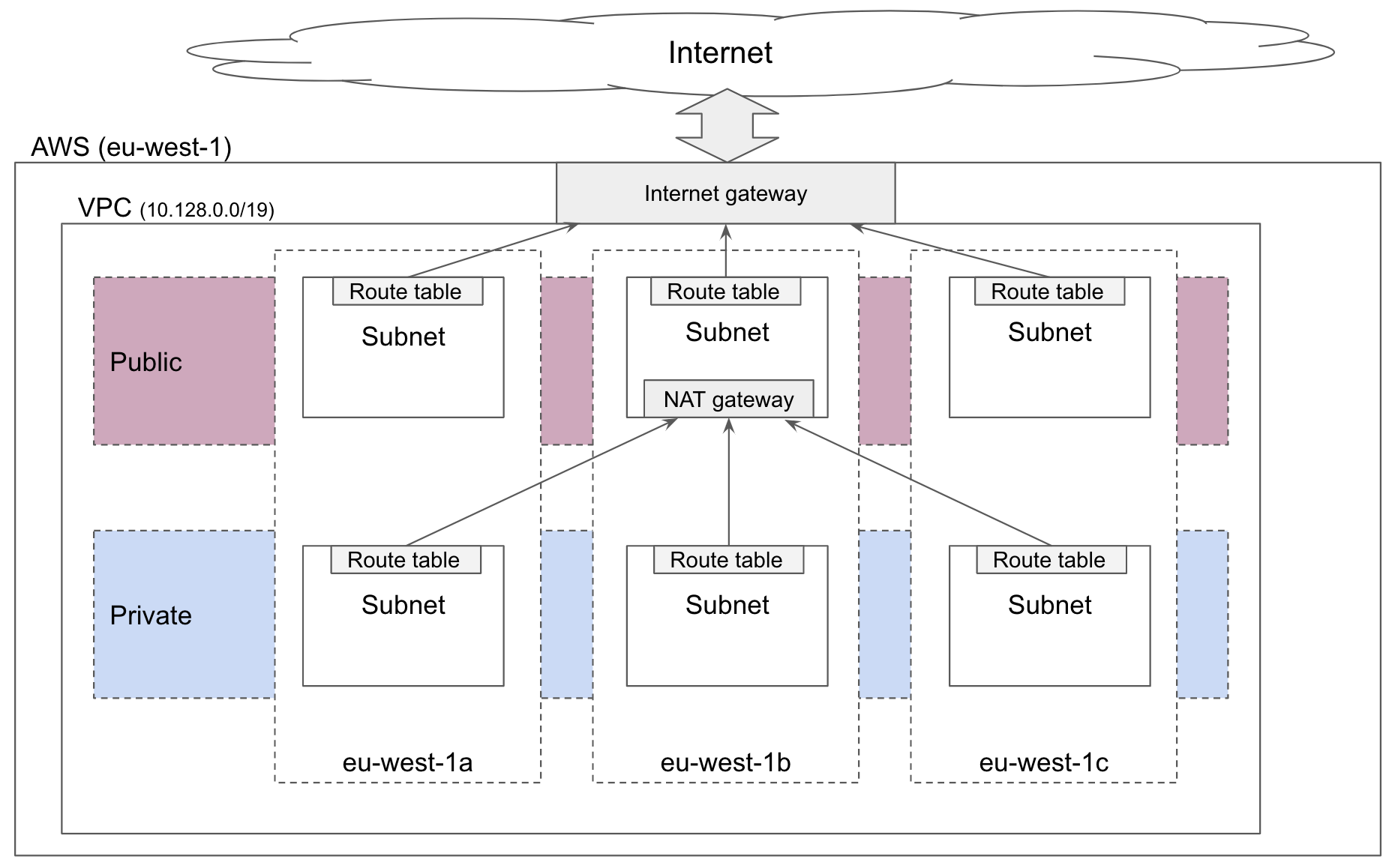 Resources in public subnets access the internet through an Internet Gateway. This lives inside your AWS account but not inside the VPC - it needs to be explicitly "attached" to the VPC where you want to use it.

Resources in private subnets access the internet differently, because they don't have public IP addresses. They use a NAT Gateway, which you create in one of your public subnets.

Each subnet uses a route table to work out how to route traffic. These route tables will refer to the Internet Gateway or NAT Gateway as appropriate. 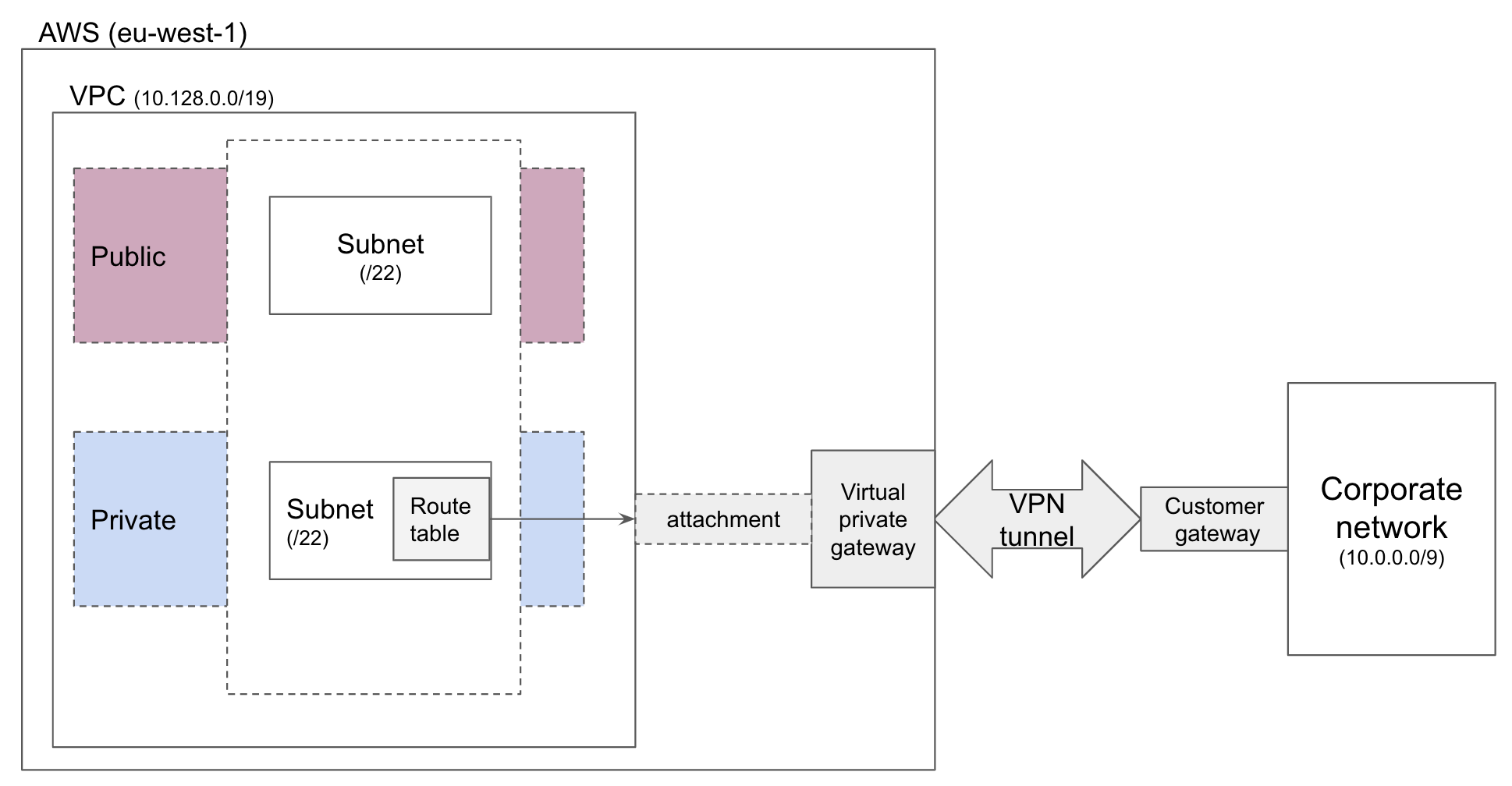 Depending on your needs, you might want a VPN tunnel between your corporate network and your VPC. This can be useful for a few reasons:

Setting up the VPN will require some work by your networks team. Once you've set everything up on the AWS side, you'll download a configuration file, send it to them, and they'll set things up on their side. This configuration file contains a shared secret, so make sure to send it securely. 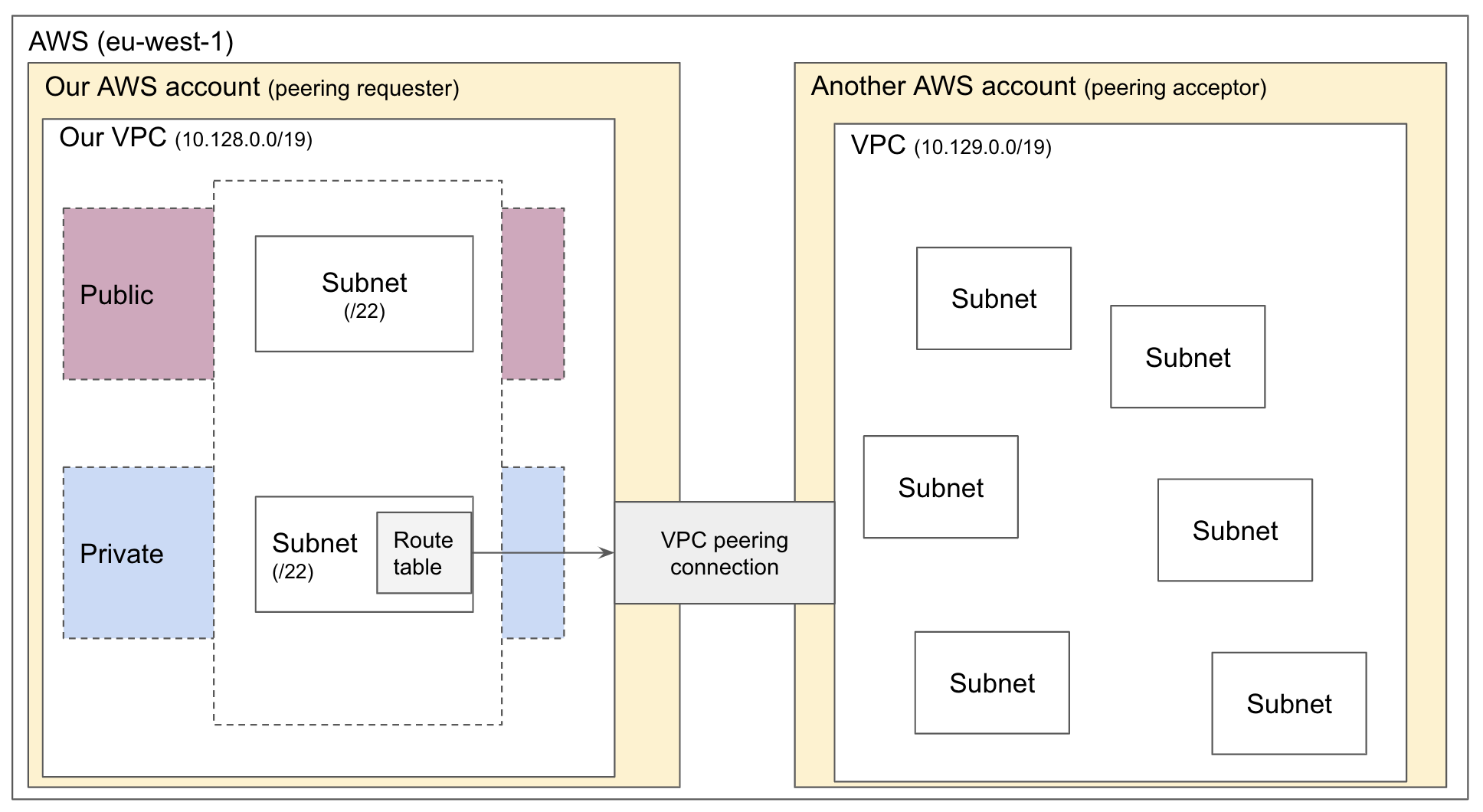 You might need to peer your VPC with a VPC in another team's account so that you can access their resources without going over the public internet.

One account has to request a peering connection, and the other account accepts it. This manual process can be automated using CloudFormation but it is a little bit fiddly:

Let's summarise what the route tables look like for the public and private subnets.

Network ACLs are similar to firewall rules in a traditional datacenter. They are the first line of network security, providing a foundation on top of which you use can security groups to add more nuanced rules.

It's worth pointing out that, unlike security groups, Network ACLs are stateless. That means you need to provide separate rules for requests (e.g. an HTTPS request on port 443) and their responses (e.g. an HTTPS response on an ephemeral port between 1024 and 65535).

The Network ACL rules for the public and private subnets are summarised below.

Note that nowadays we don't need to open any ports for ntp (network time protocol). AWS provides the Amazon Time Sync Service, which is available inside the VPC.

cross-account-peering-role.yml is the template mentioned in the "VPC peering" section above. This template should be run in the other AWS account. It sets up a cross-account role so that CloudFormation can automatically accept the VPC peering connection.