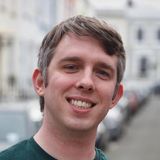 One of the best things about attending a conference like this is that you find out that there's so much you don't know and it gives you the chance to figure out what you'd like to learn more deeply next.

Here are some of the things I took away:

The first talk came from Shirley Wu and it was all about making your own visualisations with D3. I've never got round to developing them myself, but they always look impressive! It wasn't long before we were deep into D3 and I was completely lost (the live coding for this demo was extremely impressive).

The code looked clean, but without previous familiarity I couldn't keep up (given the talk length this was unsurprising).

Another talk from Joshua Comeau centred around explorable explanations; which involved showing a sound wave that changed frequency and shape as the page scrolled. The thing I realised again was that I just don't know the basics of SVG. This was one of my favourite talks, not just because of the sound wave visualisation itself, but also the way it was built and refactored step by step.

Takeaway - get to grips with the basics of SVG.

Lauren Tan took us through the usefulness of types and functional programming concepts. The team I work for has recently moved to TypeScript and I’ve been looking for a functional library to use. Although Lauren didn't explicitly mention it, I saw fp-ts being used on one of her slides. I showed it to a colleague, and they were immediately impressed.

Ken Wheeler looked like a boss and introduced us to ReasonML, which is OCaml with some syntactic differences that can be compiled to JavaScript. I've always wanted to try ReasonML, but haven't got round to using it so I enjoy hearing about it. Given our team likes functional programming, this could well be the gateway language for frontend developers and backend developers alike.

Jay Phelps took us through WebAssembly and what it could mean for future web development. The truth is that JavaScript isn't going away, but there's a strong possibility that ReasonML could be a good language for compiling to WebAssembly. That certainly makes moving to ReasonML an attractive option, but it's all guesswork at the moment.

Takeaway - learn Functional Programming better. I've wanted to for a while now, but this could really be the catalyst.

Michael Chan talked about his experiences of getting into development and how our opinions of "the right thing to do" can bring out the worst in us and our code. “It’s okay to be uncertain”.

Henry Zhu gave us a real-life look into what it means to give your all to open source software and showed us what it means to be vulnerable in front of others. He was quick to recognise how easy it is to tell other people to take a break, but struggle to take your own advice. It was a privilege to be in the room hearing firsthand some of the things he experiences.

Kent C. Dodds spoke to us about designing flexible components using tried and tested patterns, but the one thing I noticed at the beginning was that he started by saying that “Physical health is really, really important in our industry. It helps your brain. It helps you think...”. Such a small comment, but one that struck me.

Takeaway - remember to take a break from work and keep active.

No, there wasn't a talk on accessibility! ☹️

Over the last few months I've been diving into what it means to make things accessible, from design (not as much as I'd like) to development and it’s been eye opening. As it turns out, during breakfast on the first morning I got to hang out with Amanda who was the Stenographer for the event from White Coat Captioning. Stenography is super awesome and I'm glad that React Rally had thought about the need for captioning the event.

Although I mentioned visualisations earlier I did think: but what if you struggle with them? What then? (that won't be just blind people). I gave my first lightning talk about accessibility at an internal community of interest at OVO and next year my goal is to speak at React Rally about Accessibility and where you can start as a React developer. To paraphrase something Ryan Moore said in his talk, “we should never be shy about going over the basics, because they are the fundamentals we need to know”. Wish me luck!

To be honest, I was going out to Salt Lake City on my own and I was pretty nervous, but everyone I met was friendly and inclusive and I can't thank everyone enough for the way they included me; particularly Amanda and a group of guys who came from Orlando.

Convince your company that it's worthwhile sending you on a conference. There's a wealth of interesting topics to learn about that you can share with your team. You may also make new friends!