We’ve recently published a white paper on the energy savings achieved through various initiatives undertaken by OVO relating to smart meters and their data streams. Since the official national smart meter rollout began in 2016, there has been very little information made publicly available on how well they are actually doing as far as reducing energy waste is concerned.

The motivation behind this work is therefore twofold: firstly, to improve transparency in the industry with respect to the benefits of smart meters; and, secondly, to set up a process for benchmarking initiatives led by OVO to help our members save energy and money.

Since we are the first UK supplier to share this type of information, we want to explain the methodology used to detect (typically) small changes in energy usage as a result of modified user behaviour. Hopefully, this will be useful for other data teams seeking to do the same.

As a starting point, recent energy-saving initiatives led by OVO include:

These are all covered in more detail in the white paper.

Having access to smart meter data is a massive win for data teams. Where previously we relied on members to submit infrequent and irregular readings at best, or estimates at worst, now we have access to an unprecedented amount of information relating to household energy usage.

Still, measuring true energy savings from members making a real effort to curtail their usage is not straightforward, mainly because the percentage change in the underlying is often small compared to seasonal variation. In addition, systematic shifts in user behaviour and anomalous readings also have the potential to distort the measured savings. Clearly, we need to remove as much noise as possible beforehand.

It is important to note that EAC is a weighted average of the most recent meter advance and previous EACs at a given meter point, except where readings are more than 6 months apart. Likewise, the AQ calculation relies on meter readings being taken at least 6 months apart. What this means in practice is that changes in consumption from one month to the next are smoothed out, making it difficult to identify step changes in user behaviour, or indeed gradual changes that occur over a period of less than 6 months.

This methodology is perfectly acceptable for retrospectively quantifying the effectiveness of initiatives intended to deliver long-term benefits to members. For example, we now know that OVO members who have had their traditional electricity meters replaced with smart ones can expect to save 4% on average over a period of 2 years (see Figure 1). The measured effects of smart meter installation on gas usage are statistically insignificant. 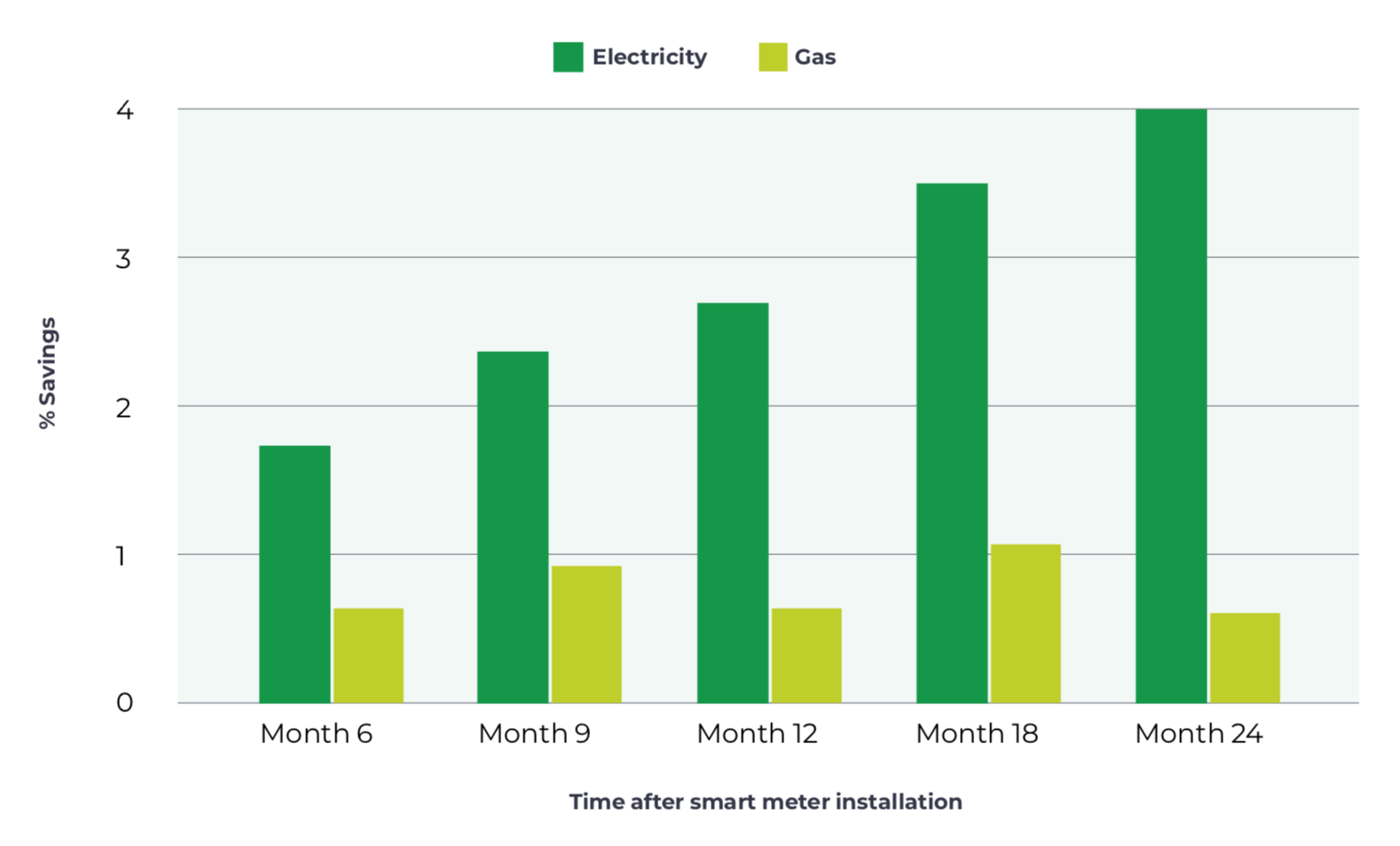 We also know that, despite largely positive feedback from members, there is no measurable benefit from having disaggregated data as far as energy usage is concerned (see Figure 2). 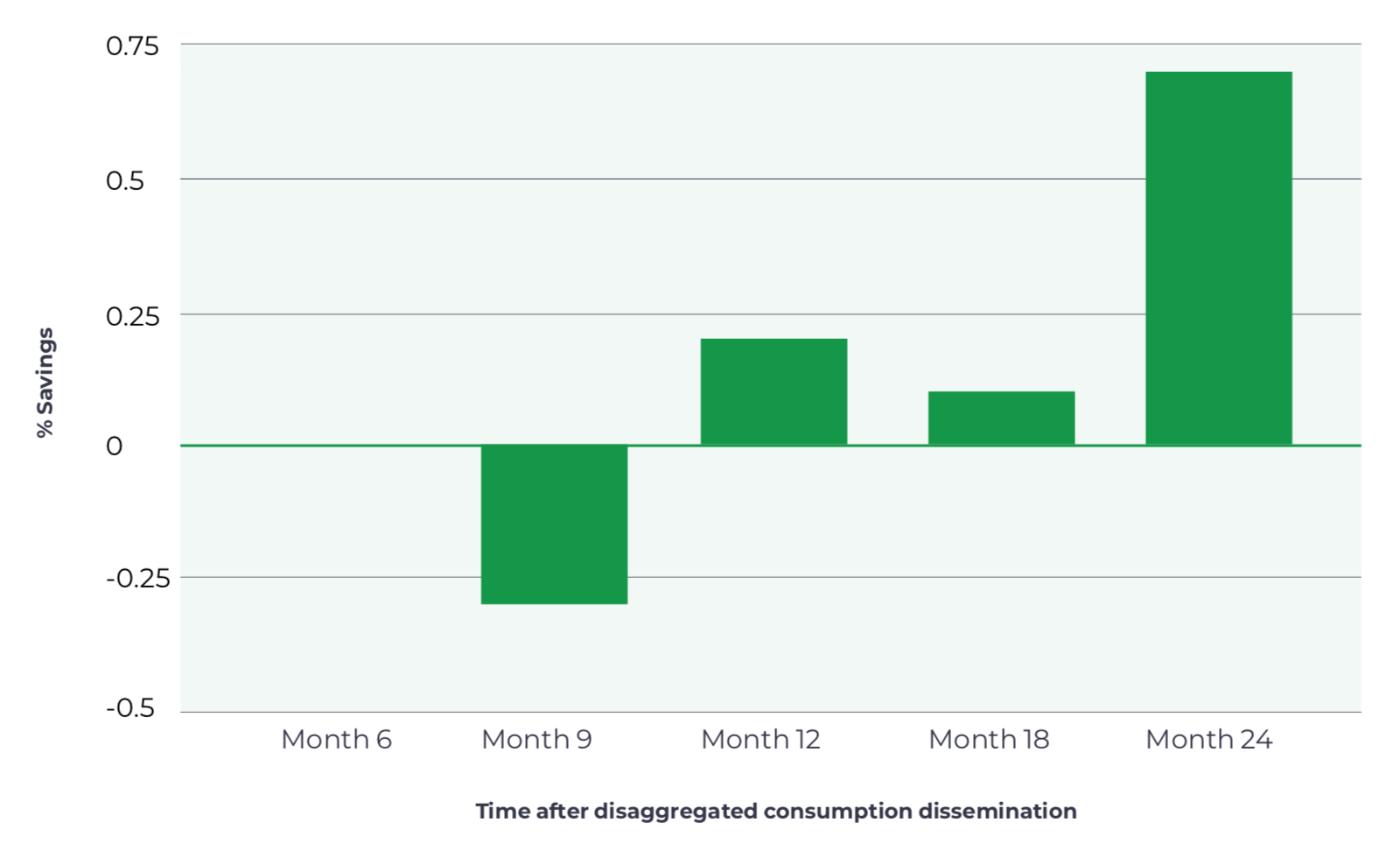 Finally, Figure 3 shows the energy savings achieved following CAD installation over a 6 month period for members who opted in to the 2017 CAD trial. Access to real-time data on multiple devices has no impact on energy usage. However, if we limit the smart meter rollout analysis to our cohort of energy enthusiasts, their energy savings 6 months after access to smart meter data far exceeds those of the general population. These gains exist for both electricity and gas customers.

Figure 3: Percentage decrease in energy consumption following CAD installation - this is compared to the reduction achieved over the same time period following smart meter installation for (i) CAD trial volunteers (our energy enthusiasts) and (ii) all customers included in the smart meter rollout study

This is a really important result that tells us that a combination of aggregated energy usage feedback and member engagement is key to driving down consumption. Potential sources of bias are discussed at length in the white paper.

We've gone through our approach to measuring the impact of smart meter installation and subsequent energy-saving enterprises on energy consumption. This has proven to be effective for retrospective analysis.

Where the methodology falls down is when we need to track the efficacy of initiatives more closely from the outset. A lag of 6 months is simply unacceptable if we want to iterate at speed. As such, we have calculated our own annualised advances for both electricity and gas using the same methodology as the service settlement providers, but without the dependency on historic annualised quantities. This will be the subject of our next Energy Savings blog post.