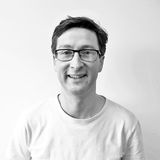 At OVO, our product and tech teams are empowered to spend 10% of their time trying out new ideas and developing skills in ways that benefit the business. This is an opportunity to focus on something outside of planned product delivery. It could mean learning new technical skills to keep pace with the continuous advances in technology or trying out an experimental idea that isn’t part of the current product roadmap.

Doing something different for a change can be reinvigorating, and everyone approaches 10% time in their own way. While there are many benefits from having the space and freedom to think about what you can do as an individual, there are challenges too. It’s not always easy to get other people engaged in concepts you’ve worked on alone. And sometimes the pressure of high-priority issues demand immediate attention and so 10% time can’t be taken or is pushed back to a later date.

In March 2019, our team spent its 10% time together to see what we could come up with. This wasn’t a top-down decision but something we decided amongst ourselves and booked in the team calendar a few weeks ahead. On the day, while some of the team had their own projects to continue working on, the rest of us got together to generate ideas.

We were made up of three engineers, a user researcher and a UX (User Experience) designer. A mix of disciplines was important so we could have a range of different perspectives. There can be a perception that 10% time is only for engineers, as the concept was first adopted in tech companies, but it doesn’t have to be.

Choosing what to focus on

The first step was figuring out what to work on. To do this, we wrote out ideas on post-its, stuck them up on the wall and then voted by marking dots on our preferred options. Examples of what we came up with included:

There was a mix of user-centered challenges and technical improvements. We picked ‘Help customers understand what a Kilowatt Hour (kWh) actually is’, as this was a problem we all felt we could contribute to solving.

We talked about the question that we set ourselves. Do customers need to know what a kWh is? Will knowing what a kWh is help users to complete their goals?

We discovered this interesting infographic which shows how much electricity it takes to power an average UK home. In addition, it shows how this amount of electricity could be generated from four different sources – coal, solar power, wind turbines and hydropower.

We also looked at experiences from outside the energy sector to see what we could learn. For example, Citymapper is a public transit app and mapping service for cities. It’s primary purpose is to get you from A to B, but for each journey can provide all sorts of extra stats (such as the number of ‘Trees saved’ by using public transport instead of a single-occupancy car). This is an easily understandable way of quantifying how much CO2 you have saved and helped us think about ways we could describe kWh usage.

By sketching out ideas and refining them, our response to the original question around kWh started to evolve. We made two experiments - one as an infographic and the other in code.

Experiment 1: How much renewable energy is required to power your home?

It’s easy to imagine how coal is burnt to produce energy. The bigger the pile of coal, the more heat is produced, the more energy is generated. What about renewable sources such as wind or solar power? How do you convey how much wind power is needed to power your own home?

For instance, how long would a wind turbine need to turn in order to produce a year’s worth of electricity for your household? To get some sample figures, Ben in our team shared some of their own home energy usage data. We estimated it would take 2 hours of turbine generated energy to generate the equivalent of Ben’s usage last year. (Note: these are approximate figures for illustration purposes only). 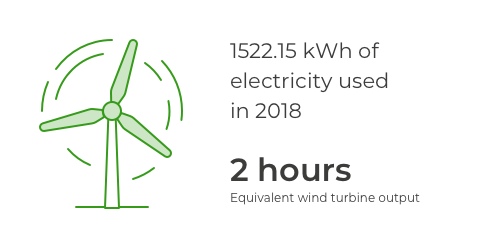 We calculated how many solar panels would be required to generate the electricity used by Ben in March 2019, based on an average amount of sunshine for that month. 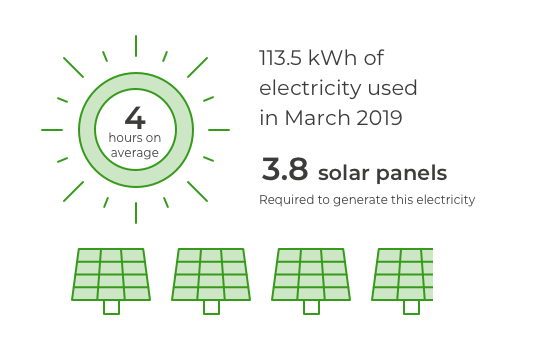 As this graphic illustrates, even if more electricity is consumed in August than March, fewer solar panels are required as there’s typically more sun in the summer months. 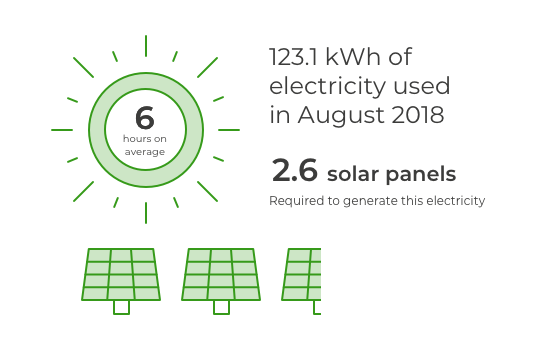 Experiment 2: How far could I travel in an electric vehicle based on the energy I use?

While interest in owning electric cars continues to grow, it can be difficult to imagine how much energy a vehicle would use and cost to run.

What if you took the amount of electricity consumed by your home in a single month and used it to power an electric vehicle? How far would you get?

We converted a month’s worth of usage into the mileage rate of a popular model of electric vehicle (a Nissan Leaf). This was then mapped against a mileage chart of distances between 200 cities in the UK.

Based on our hometown example of Bristol, we found out that Ben could have driven to Aberdeen six times using the same amount of electricity he used at home in February! This is a rough and ready calculation, but it was interesting to see the different locations the data would come up with.

In both experiments, we focused on presenting the customer’s own usage data instead of national averages or estimations. This approach makes energy generation and consumption more personal and less abstract. As a starting point it was a lot of fun to experiment and it may become the basis of a real product feature in the future.

One observation about the day is that we didn’t rush straight into making things. The actual time designing or developing was probably only a couple of hours – there was much more time spent having conversations and discussing the benefit and value of ideas. Another take-away from taking 10% time together is that it’s not only about the output. It also helps build relationships in the team through working together on an ambitious challenge in a short space of time.

If you’re in a product team, why not consider taking some 10% together?